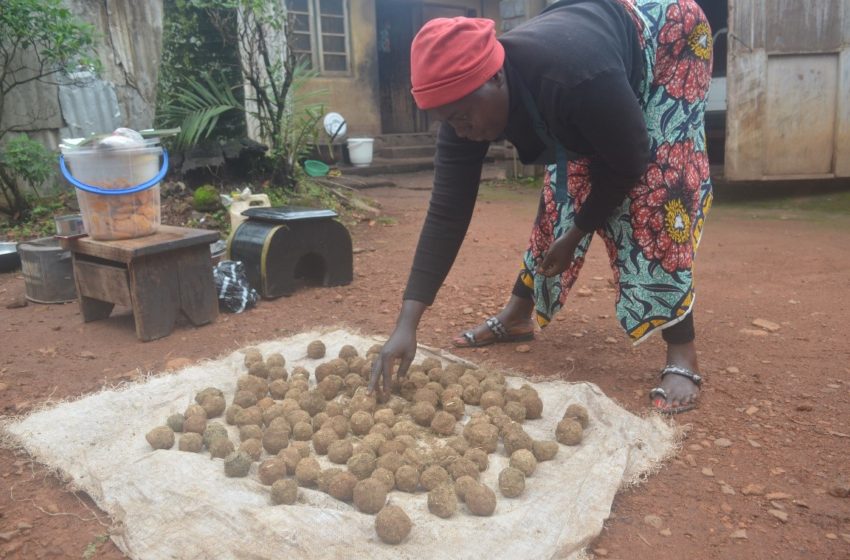 It is yet another quiet Monday afternoon in Bamenda with not a single motorcycle or car cruising the streets as has been the case for the past 6 years because of the ongoing Anglophone Crisis. The familiar silence of this day is regularly interrupted by the buzzing house flies flapping their wings over the heap of cow dung dumped next to the pile of corncob and bowl of sawdust. All these are to be used for the production of organic charcoal.

This initiative is by a group of Internally Displaced (IDP) women from different villages in the English speaking regions of Cameroon, who as a result of the ongoing Anglophone crisis were forced out of their homes and fled to Bamenda City in Northwestern Cameroon.

Due to the crisis, thousands of households have been displaced, including women and girls. These women use the traditional three-stone fire for cooking, which encourages deforestation due to cutting down trees for fuel. It also leads to indoor air pollution that has negative effects on their health. They have been trying out different income-generating activities to take care of themselves and their family members and the production of organic charcoal is just one of them.

One of the women is 38-year-old Mbah Mispah Acha, from Batibo, a village in the North West Region of Cameroon. She says she has been frying “Accra Beans” since she arrived in Bamenda and now produces organic charcoal and sells it as well. According to her, she has been having eye problems because of continuous exposure to smoke from the fireside. After attending training from RuWCED Cameroon, a local Non-Governmental Organisation on the production of organic charcoal, she has never gone back to the fireside.

“I prepare any kind of food using eco-charcoal in a charcoal pot and it is very effective as using the three stone fireside. I equally use it to fry Accra Beans and sell them to sustain my family. This eco-charcoal produces less smoke, burns well, does not smell and does not blacken my pots. It’s more efficient than using firewood because it does not require me to often check and fix the fire,” she said.

She also revealed that this organic charcoal has aided her in farming as the ash from the charcoal serves as manure for her crops.

Lonegih Comfort Nain, a 40-years-old IDP woman from Mbingo narrated how the eco-charcoal has been of great help to her and her family. “Since I started using the eco-charcoal, we breathe fresh air, our pots no longer get very black, we spend less in getting cow dung and corncobs than getting firewood.”

“When I was still using firewood, the smoke use to be unbearable sometimes and at times fire burns my hand too. I used to spend so much on buying firewood or paying for a wood to be cut for me to use as firewood. Eco-charcoal has greatly helped me to save money as well as make money because the last time I made it, I sold it to a neighbour,” she said.

This act alone goes a long way to promote one of the key focuses of the United Nations Environmental Programme (UNEP), which is on achieving a significant reduction in deforestation rates while enhancing agricultural productivity.

It equally ties with one of the resolutions reached, at the COP26 Glasgow Climate Pact in 2021, which emphasizes the importance of protecting, conserving and restoring nature and ecosystems, including forests and other terrestrial and marine ecosystems, to achieve the long-term global goal of the Convention by acting as sinks and reservoirs of greenhouse gases and protecting biodiversity, while ensuring social and environmental safeguards.

Tata Elvis, the CEO of Cameroon Youths for Sustainable Development and Environmental Protection (CAYSDEP) believes that waste can be recycled to promote sustainable communities, that way, not wasting waste. Using the example of eco-charcoal, he mentioned how it not only acts as an alternative source of fuel but equally contributes to fighting indoor pollution.

“Before, women threw away cobs after the maize has been eaten, but with this new recycling technique, these women simply need to mix cow dung with the corncobs and they can get Cocorbs, an alternative source of fuel, which replaces the firewood and goes a long way to reduce deforestation which is one of the causes of climate change,” he says.

The use of firewood for cooking has however been a long time tradition for Cameroonian women who would gather their families around the fireside to share stories and bond. Until today, some of them rely exclusively on wood to cook meals for their families despite the advent of other modern methods. Some have been holding to the belief that food cooked over wood tastes far better than that cooked using any other source of energy. It is equally very common to find women by the roadside frying “puff-puff” or roasting maize, plantain, plums or fish over charcoal to make ends meet.

Environmental and medical experts have pointed out severally that the smoke emanating from burning wood is a form of pollution and hurts the environment as well as the health of these women exposed to it.

According to Ndah Grace, North West Regional Resource person for Sexual and Reproductive health, indoor air pollution not only affects the respiratory system but the sexual reproductive health of women as well.

“Indoor air pollution is very common in our society, especially in our local communities where we believe so much in cooking our food in the firewood kitchen using wood more often than people who use gas. Even though using gas exposes people to this air pollution, people who use firewood are more exposed because of the amount of smoke that comes out from burning wood. This smoke contains gases that are not very friendly to human life like carbon monoxide, carbon dioxide, and nitrogen. All of these gases come from the smoke emanating from our firewood kitchens and it deprives the air of oxygen which is what we breathe,” she says.

Regarding reproductive health, she says a woman who is pregnant needs more oxygen and fresh air and being around smoke can reduce the oxygen level thus affecting the amount of oxygen that circulates in her blood. It can also affect the growth and development of the foetus that is in the womb.

“I very much appreciate this alternative source of fuel because it goes a long way to reduce these dangers wood smoke has on the health of particularly women and children.  If more people can be taught how to produce and use this organic charcoal, then we can be sure of better health for women and equally a better environment,” she concludes.

Dieudonne Tantoh Nforba, better known as Farmer Tantoh is a Cameroonian environmentalist and founder of Save Your Future Association (SYFA). He stated that indoor air pollution should be fought at all costs because of the effects it has on the environment and the health of individuals.

“Indoor air pollution can be caused by cooking with firewood, leading to a lot of smoke, burning of household trash around like vehicle tyres etc. It produces an unpleasant smell which irritates and causes breathing difficulties, affects the eyes and causes eye problems like cataracts,” he said. adding that it is important to educate the public to reduce activities that may increase indoor air pollution and embrace green initiatives like the eco-charcoal.

Firewood gathering is also widely believed to be a key agent of deforestation in many developing countries worldwide. As such, many countries have put in place legal frameworks to tackle deforestation and air pollution. In Cameroon, such frameworks are not common to the population.

Mr Agbor Ebai Maurice Tambe, the Chief of Service for Information, Sensitization, and Documentation at the North-west Regional Delegation of Environment, Protection of Nature and Sustainable Development points out that the implementation of the laws in Cameroon is not serious because of administrative tolerance.

“People are not punished for environmental crimes so they keep on repeating. At the base, less is being done. However, the production of eco-charcoal from waste is environmentally sustainable to preserve our forests from deforestation. Cutting of trees for firewood will be reduced and wood harvesting for fuelwood. Waste will be sustainably managed. Reducing deforestation is preserving the forest, thus increasing the ability of the forest to sequestrate carbon, thus mitigating climate change,” he explained.

This remark by Mr Ebai is in line with one of the key elements of the African Green Stimulus Programme (AGSP) which anchors on supporting the sustainable management of forests.

Despite what environmental activists term as the lukewarm nature of the policy implementation in Cameroon, Non-Governmental Organisations (NGOs) are working tirelessly in this area. Mr The Coordinator of the Rural Women Centre for Education and Development (RuWCED-Cameroon), Mr Akuro Forsab stated that they have been doing much in ensure environmental protection and sustainability.

“The Northwest Region of Cameroon is plagued with multiple shocks. We have the socio-political crisis on one hand that has led to over 52,000 internally displaced, we have climate variability and we have the Covid-19 pandemic. Women and girls are the most affected,” he said.

He says it is for this reason that RuWCED is training internally displaced women on the production of clean cooking energy and also sustainable watershed management.

“We have distributed 3500 water friendly trees to reforest 12 degraded water catchments around Mezam and another 200 trees were donated to the University of Bamenda under the Tubah watershed area. We have equally trained another set of IDP Women on converting plastic waste into nursery pots,” he says, adding that they partner with the North West Regional Delegation of Environment and Protection of Nature and other stakeholders to perform other activities like removing waste from water bodies, planting trees in academic institutions and also sensitizing the public through radio programmes on international days like the World Wetland Day, World Environment Day, World Earth Day and World Ozone Layer Day.

“It is commendable to see how one action alone can contribute to tackling different environmental issues and at the same time is economically and socially advantageous to the society. The production of the organic charcoal helps prevents the felling down of trees for firewood, that way reducing deforestation.”

“It also prevents the emission of wood smoke which affects the quality of indoor and outdoor air, thereby reducing air pollution and it equally promotes agricultural productivity as the ash gotten after burning the organic charcoal can still be used as manure for crops,” he stated adding that it serves as an income-generating activity for these vulnerable women or any other person who decides to engage in it.

“It reduces the health effects that continuous exposure to wood smoke causes. Our governments and authorities should therefore greatly invest in such activities when it comes to environmental protection and sustainability because of the remarkable impacts and solutions it brings both to the environment and human health,” he said.

COP 26called on Parties to increase the full, meaningful and equal participation of women in climate action and to ensure gender-responsive implementation and means of implementation, which are vital for raising ambition and achieving climate goals. This is why Cameroon should not leave any woman behind in its fight for climate justice.