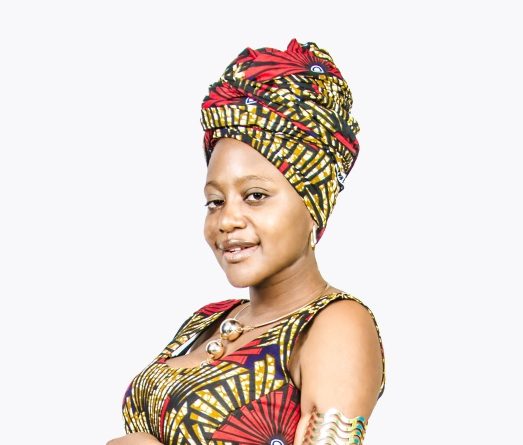 Amid the ongoing Cameroonian civil war which started as a low-scale insurgency in the Southern Cameroons leaving thousands of people killed and more than half a million displaced, a female journalist has set up a foundation to empower women and Internally Displaced Persons with relevant skills through capacity training among other things.

A 2021 report by the Internal Displacement Monitoring Centre reveals that Cameroon hosts the second largest population of IDPs in Central Africa after the Democratic Republic of the Congo.

“The number of IDPs rose consistently from 2014 to reach an all-time high in late 2020 after a vast majority fled violence in the Northwest and Southwest regions.” the report stated.

Moma Sandrine Lenyonga was born and grew up in Nkwen Bamenda, a neighbourhood in the country’s Northwest region where according to her, people struggled to the point that “eating a meal of rice and stew was considered a privilege”.

Bamenda is the capital of the north-western Anglophone region of Cameroon which for the past six years has been steamed up by armed insurgents seeking to separate the Anglophone areas from the French-dominated central government.

Data from the World Bank shows that between 2007 and 2014, the overall number of poor people in Cameroon increased by 12 per cent to 8.1 million and poverty is concentrated in the country’s northern regions, where 56 per cent of the residents are poor.

After her GCE Advanced Level Certificate, Ms Sandrine enrolled at the University of Buea, where she obtained a Bachelor of Science in Journalism and Mass Communication before going for professional training in interior and exterior decoration.

Currently practising in the Northwest Region of the country as a web journalist, she doubles as an event planner/decorator, digital rights activist, human rights activist, and photographer as well as the founder of Destiny Hearts Foundation, an initiative aimed at empowering the youth.

“The initiative was born out of my desire to give back to society what God has given me. I felt I had so many ideas I could share with others. I wanted a platform where I could mobilise resources to help those in need.” Sandrine added that many need help but have no one to support them.

Since its establishment in 2020, Destiny Hearts Foundation is known for organising capacity trainings and empowering women and other Internally Displaced Persons in the region by teaching them sustainable skills needed to survive amid hardships.

In April this year, Destiny Hearts partnered with another NGO, Grace Chin Foundation to train about 60 IDP women in Buea, Southwest Region of the country on how to bake and afterwards supported them with small bags of baking flour.

“I got to know about the training when Grace Chin Foundation contacted me asking that I mobilize other vulnerable women in my area to benefit from the initiative.” Ms Ngwetoh Nchangmum wanka, one of the women who benefitted from the training told AWiM News.

Ms Wanka who was forced to relocate from Bamenda a year after the crisis started lamented that life hasn’t been easy for the IDPs especially women with disabled kids who left their homes due to the crisis and are now trying to start a new life.

“One of the women who participated in the training with us has a child with autism spectrum, which makes her unable to leave the house since the child cannot even sit on his own and requires constant attention,” she added.

Currently, Ms Sandrine through her initiative is training a group of girls on bedsheet production as well as interior/exterior decoration. This is part of the skill acquisition programmes she uses to share her knowledge as a professional interior and exterior decorator.

As soon as schools closed for the holidays, 18-year-old Stephanie Sirriwah, a secondary school student is currently receiving free training from Ms Sandrine in bedsheet production.

“I hope to use the skill I’m getting now to assist myself after school and I’m very thankful to Destiny Heart for empowering young girls like me through this initiative.” Ms Stephanie told AWiM news.

Aside from capacity training and empowerment programmes for women and girls, the Initiative has carried out several sensitisation programmes including creating awareness of Covid-19, fighting against fake news and hate speech and sensitization on menstrual hygiene amongst others.

During one of the sensitization programmes on menstrual hygiene held last year in a private secondary school located in Yaoundé, over 200 sanitary pads were distributed to female students.

“Most Form1 and 2 students aged 10-14 years do not receive sex education and menstrual hygiene tutorials from school so the sensitization and distribution of sanitary pads aimed at getting them better prepared for their first menstrual flow without them being embarrassed,” Ms Sandrine said.

One of the major problems faced by Internally Displaced families is affording quality education for their children since they live in poverty and can barely afford a good meal.

Destiny Hearts foundation has managed to pay tuition fees for some of the IDP children thereby renewing their hopes for a brighter future.

Mr Giyoh Chrisantus, who’s in charge of the IDPs in Yaoundé Santa Barbara told AWiM News that one of their major difficulties is sending the children back to school so they can acquire formal education with the hope that the crisis will be over soon and they’d return to their homes.

With this in mind, he spoke to one of the ladies who visited the IDP camp to link them up with organisations that would assist them. “That was when Destiny Hearts came into the picture and paid for the school fees of some of the children both the 2020/2021 & 2021/2022 academic sessions,” Mr Giyoh added.

“All these are done with personal funds together with the little I and my team get from donors each time we solicit for funds publicly. Hence it hasn’t been easy but with the spirit of charity and love for humanity as our driving force, we hope to do more for the vulnerable displaced women and children in this part of the world,” Ms Sandrine concluded.