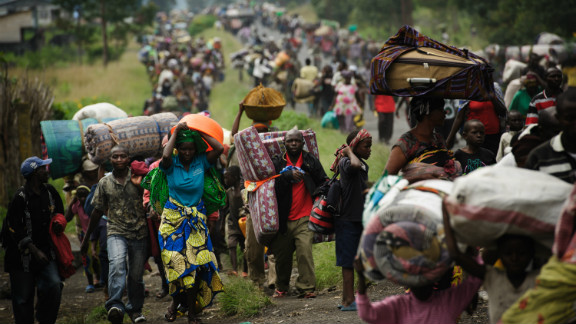 More than 30,000 people have fled their homes in eastern Democratic Republic of Congo following heavy fighting between the army and M23 rebels in Rutshuru, near the border with Uganda.

About 5,000 fled to Uganda, while 25,000 others are camping in schools and churches in Rwanguba, Kabindi and Kinoni areas of Rutshuru, the UN’s humanitarian affairs office says.

The army and the rebels accuse each other of instigating the fighting and each claim to have won the Sunday clashes.

In a statement, the army said it now controls the border town of Bunagana.

But M23 spokesperson, Willy Ngoma, said they killed many government soldiers and others had left behind their weapons while fleeing to areas around Bunagana.

The army accused Rwanda of helping the rebels’ attempt to take Bunagana. Rwandan officials have consistently denied allegations of supporting the M23 rebels.

On Saturday, the Rwandan and Congolese armies had accused each other of shelling across the border.