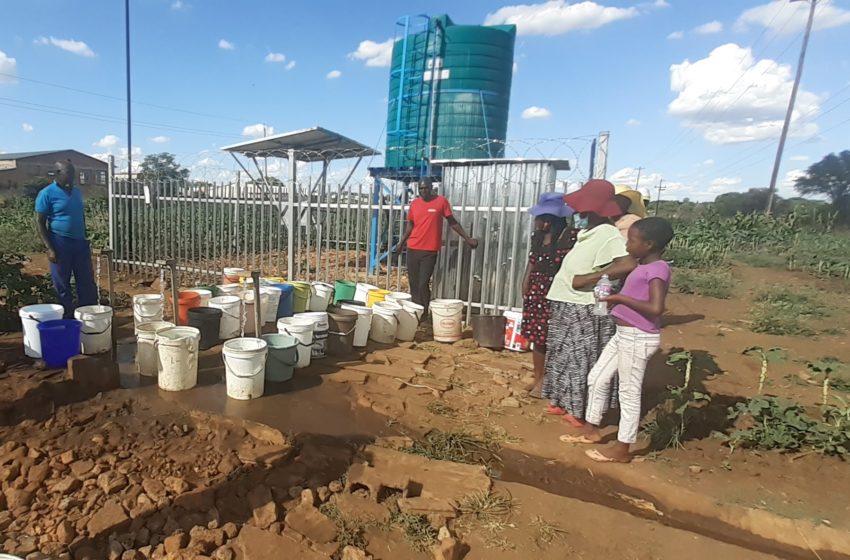 The morning chill tore through *Marian’s thin clothes as she hurried along a well-trodden path leading to the water well nestled in the bushy area several kilometres from her house in Mabvuku high-density suburb of Harare, the capital city of Zimbabwe.
As she walked (half running) Marian’s single thought was on getting to the water point before the infamous water barons.
She was oblivious of the harm lurking in the dark shadows waiting to pounce on her.
A few hours later, her story was all over the local news.
Police confirmed on their official Twitter account that Marian’s attacker had covered her face with a cloth and repeatedly defiled her limp body when she became unconscious.
Mabvuku, like many high-density suburbs in Harare and Bulawayo (the second largest city), has gone for years without water, forcing many people to wake up early in the morning to scout for the rare commodity.
The country’s groundwater is depleting rapidly because of climate-induced droughts.
The effects have become one of the biggest drivers of gender disparities and violence.

Cases of gender-based violence have been on the increase at water points.
Studies and reports show that girls have fewer days in school and may even drop out. The dropouts will likely marry early and perpetuate child marriages.
On the other hand, women reported that spending more time searching for water has made them targets for abusive partners who demand attention and complain about unfinished household and family responsibilities.
Some men respond to this with violence, and the women bear the brunt.

Water barons, who are all male youths within the community, take charge  and demand sexual favours from the vulnerable women and girls
This is in direct contravention of Goal Number 5 of the Sustainable Development Goals (SDGs)  , which aims to achieve gender equality by ending all forms of discrimination, and violence.

However, a  water kiosk project initiated by the women themselves has gone against the set norms, reducing gender-based violence and reversing roles and fulfilling one of the key principles of the African Green stimulus Programme (AGSP) improved water use and conservation.
It is midday at a shopping centre in the Budiriro suburb of Harare, and the blazing sun shows no signs of relenting. Sixty-five-year-old Beatrice Taonezvi, however does not mind the heat as she effortlessly lifts a 20-litre bucket from under the water dispenser and perches it on her head.

Taonezvi and members of her community have benefited immensely from the water kiosk that has been operational since 2020.
It was borne from years of spirited efforts by local women-led community groups who were tired of the violence at the water sources and at home.

The system works with smart water dispensers that are solar-powered and a battery inside for 24 hours.
“The communities buy tap cards which they load credits which are equated to the volume of water procured, “explained Taonezvi.
She is proud of their facility run by an all-female committee that accounts for the money and uses it to maintain the facility.

Paths to the water sources are secluded and a breeding ground for rape and abuse of women. Photo/Phyllis Mbaje/AWiM“Women were bullied at the water points. We would spend the whole day queuing but now I can get back home on time for other chores,” she said.
The women attended local authorities’ meetings to voice their concerns over the rising GBV cases at water points.
Monica Nyamadzawo, the chairperson of the Budiriro community group, narrated how they organised ‘borehole diaries’ meetings where they chose a committee to take up their issues.
“The women were instrumental in getting partners like UNICEF to initiate the water kiosk project,” said Nyamadzawo proudly.
However, while negotiations were going on, the women had to devise other means to tackle the violence.
” We set up WhatsApp groups depending on where you lived. Members would agree on the time to go to the water points and move as a group of no less than 10 women.”

Replicating in other regions

The women groups were replicated in many communities. Twenty-eight-year-old Lucia Muzuro, who is now a water seller at one of the kiosks, said she had suffered at the hands of the barons.
” Because I am differently abled, my challenges were plenty. The barons would make fun of me.   I stood in the queues just like everyone else,” she recalled will sadness.

“The kiosk has not only provided me with a job but  I am happy that vulnerable members like myself (disabled) get water for free as well as the elderly and orphans,” said Lucy.
During the official opening of the kiosk Laylee Moshiri, the UNICEF representative said “This is important as we know poor WASH infrastructure and lack of maintenance contributes to the poor living conditions “.
Another partner Oxfam, which provided the technology, said the initiative was in line with the conservation of natural resources.
Innocent Rangeti, the Oxfam WASH team leader, praised the innovation and tech-savviness, affirming it would ensure accountability.
Secretary for the Budiriro water kiosk committee, Aruperi Mapira, said the water project had reduced gender-based violence, with women now spending more time with their families.
“Spending all those hours at the boreholes and away from home was not good for families and couples fought a lot and women bore the worst brunt,”
Already community health clubs, mostly made up of women, are venturing into detergent making schemes and use the water kiosk to showcase their products.
“Our products are sold here at the water kiosk. As people come to buy the water, we also get an opportunity to tap into that market,” she explains.

They plan to sink a borehole from the proceeds and install a tap for unfiltered water meant for a vegetable garden.
In Zimbabwe, about 1 in 3 women aged 15 to 49 have experienced physical violence, and about 1 in 4 women have experienced sexual violence since the age of 15.
The national GBV Hotline, run by Musasa – a partner dealing with issues of violence against women and girls and providing relief to survivors of Gender-Based Violence (GBV) has recorded more than 6,800 GBV related calls from the beginning of the lockdown on 30 March 2020 until the end of December 2020, with an overall average increase of over 40 percent compared to the pre-lockdown trends.
About 94 per cent of the calls are from women.
Justice for victims of violence and particularly sexual and gender-based violence, has remained elusive. Meanwhile, the kiosks have also reversed gender roles.
“The advent of the kiosk has brought so many changes. We now see gender roles shifting. Men are our now frequent clients here,” said Nhamo Chikandiwa the chairperson of the Warren Park water kiosk project

Urgent action
A communications, gender and development expert, Virginia Muwanigwa, who also heads up the Zimbabwe Gender Commission, said it was time to hold the government accountable to fully implement policies and laws that uphold women’s rights and end patriarchy, which breeds gender disparities and violence.
“Laws and policies may be there but we implore government and partners to match this with action according to the dictates of the constitution,” she said.
Meanwhile, there have been calls for the urgent address of climate change and stem its harmful effects.
During the recently held 5th United Nations Environment Assembly (UNEA), the executive director for UN Environment Programme  (UNEP), Inger Andersen, made a call for speedy action to address climate change.
“We need to close the time between scientific discovery and action. We are far behind on climate action, while the nature and biodiversity that underpins our existence disappears,” she said.
Andersen impressed the need for a  nimbler and more inclusive science-policy interface that will accelerate effective policies and follow-up action.
“This is how we will save and improve lives, protect the vulnerable, conserve nature and allow all communities to thrive and prosper,” she said.

A recent road to COP27 kick-off meeting hosted by the Zimbabwe Coalition on Debt and Development (ZIMCODD) in conjunction with the Zimbabwe Climate Change Working Group (ZCCWG) in Harare revealed plans by  Egypt (the hosts for the 27th  conference) to craft an initiative that will come up with ways of assisting women and children cope with the adverse impacts of climate change.
“Women are adversely affected by climate change.  The initiative focuses on the predicament of women due to climate change and tries to proffer solutions,” said Egypt’s Ambassador to Zimbabwe Mahmoud Amer.

*Names changed to protect the identity of the minor