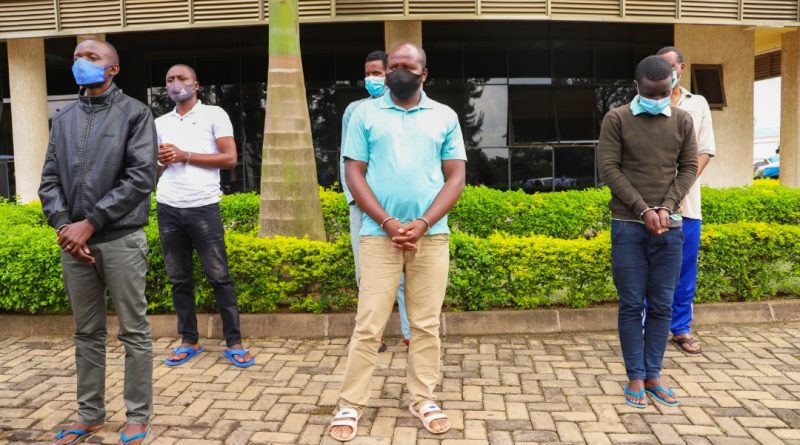 Early this year, Eric 35 a resident of Kigali city who does not want to reveal his second name for fear of exposing his full identity developed itchy eyes for several days as the problem persisted he thought assistance of a physician friend who promised to get him eye drops that would help to treat itchy eyes.

As desperate as he was, Eric on receiving the eye drops he went ahead and applied it as he had been directed by the physician friend.

In a few days, the situation would become complicated with the first eye losing sight while the second also started getting affected.

As the situation worsened, Eric sought medical help from opticians at one of the main hospitals in Kigali who after narrating his story was advised to stop applying the eye drops and directed him to seek specialized treatment at the Rwanda charity Eye Hospital on the outskirts of Kigali city.

“After a few days using the eye drops I developed severe pain in his left eye that came with the rotting of the retina,” Eric says with tears rolling down his cheeks.

“At Rwanda Charity hospital I narrated my ordeal and several tests were conducted, the opticians informed me that the eye drops I had used weren’t fit for use and could have expired or had been poorly kept hence getting damaged and these were the side effects,” he continues to narrate his ordeal.

At the hospital, a specialized surgery was conducted to repair the retina and prevent further vision loss and somehow stabilize vision.

Though Eric’s vision in the left eye hasn’t been fully restored, further damage has been tamed and with continued treatment and examinations he hopes his vision could get better with time.

From Eric’s ordeal several questions arise on how unfit or expired drugs end up in the hands of someone who ignorantly used it and hence put him at the risk of losing his bright future as there are some jobs he can no longer do due to limited sight.

A pharmacist at one of the hospitals in the Eastern province of the country who prefers anonymity explains that the underground sale of medicine has been happening and it could be how the medicines ended in Eric’s hands.

“ Some of our colleagues in the industry steal drugs, this happens mostly in pharmacies upcountry. It doesn’t necessarily mean the drugs stolen  are expired drugs but because of poor storage after they have stolen them leads them to get damaged hence becoming unfit for use and in turn affecting the users,” he explains.

He notes that these medicines are taken out of pharmacies and hospitals and given to certain brokers who sell them to patients at cheap prices.

“Most people buy these medicines because they come cheaply monetary value wise but the effects on one’s health can never be valued. Also people buy them because it is very hard to buy medicine from the counter without a prescription note from a certified hospital or a physician so because of all these processes involved some end up settling for such ailments they deem not serious,” he adds.

He says some of the most sold drugs include paracetamol, Amoxicillin, small ailments drugs and HIV drugs for patients who feel shy to go to health centers to pick their medications.

Some bar and  pub operators also purchase some medicines like cough syrups from the black market for their specific customers who normally mix it with beer to get high on limited alcohol according to Hakizimana , a bartender at one of the bars in Kigali suburbs.

“Some customers who don’t like drinking too much but want to always get high quickly mix beer with a few drops of cough syrup which we are obliged to get for them since they pay for it handsomely.” Hakiziman explains.

Asked how they store these syrups he explains that they just hide it away just like any other illicit drug.

“We don’t really care about how these syrups are kept or whether they are fit for human use because at the end of the day, the one who is going to use it will be abusing it to get high like he has used cocaine or Marijuana,” Hakizimana notes.

The cough syrup normally used is the one that contains the opioid codeine and the antihistamine promethazine  it is normally mixed with soda or beer. In countries like the USA where it is so common it is known to cause trouble breathing, drowsiness or sleepiness.

According to health online the most serious potential effect of mixing even a small amount of alcohol with cough syrup is respiratory depression. This reduces the amount of oxygen to your brain. It can lead to organ damage, coma, or death.

To protect the public from substandard medicine and other pharmaceutical products the government of Rwanda in 2018 set up Foods and Drug authority with the mandate  to protect public health through regulation of human and veterinary medicines, vaccines and other biological products, processed foods, poisons, medicated cosmetics, medical devices, household chemical substances, tobacco and tobacco products.

Since its establishment there has been a reduction in illegal sale of pharmaceutical products as most dealers have opted out in fear of the long arm of the law catching up with them.

The authority together with the Rwanda National police has conducted several raids in which pharmaceutical products and other illicit goods were confiscated. One of them is an annual operation which is dubbed “Usalama VII” conducted between September and October across the country with the aim of getting rid of these illicit activities.

Speaking to the press after the operation Lazare Ntirenganya, the Division Manager in Rwanda Food and Drugs Authority (Rwanda FDA) said that the impounded products were banned due to their ill-effects to health, environment and overall human security.

“FDA released a list of foods, drinks, pharmaceuticals and other products that are not allowed in Rwanda which some of those allowed were either found to have expired, substandard or counterfeits brought on the market through illegal channels,” Ntirenganya said.

“There are other products like pharmaceuticals, which are sold by non-professionals in unlawful places. Medical drugs can only be sold in pharmacies and other licensed health facilities.” He added.

“This should send a strong message to anyone poisoning residents of Rwanda. Rwanda National Police and other law enforcement and relevant entities will continue to carry out these operations. Dealers should know that police eyes and ears are everywhere because of the ownership and responsiveness of the public, who share information about dealers,” CP Kabera warned.

To continue building capacity among the country’s institutions to fight substandard medical drugs and other goods sold illegally on the market  the government has partnered with several development partners including the experts from the Health Protection Department of the Italian Carabinieri who recently trained thirty people drawn from different public institutions on food and drug quality inspection and the European Union that has strengthened the capacity of Rwanda Food and Drug Authority through Twinning cooperation with EU Member State agencies and providing critical lab equipment.

This investigation was supported by the African Investigative Journalism Conference, the Gates Foundation and the Henry Nxumalo Foundation.