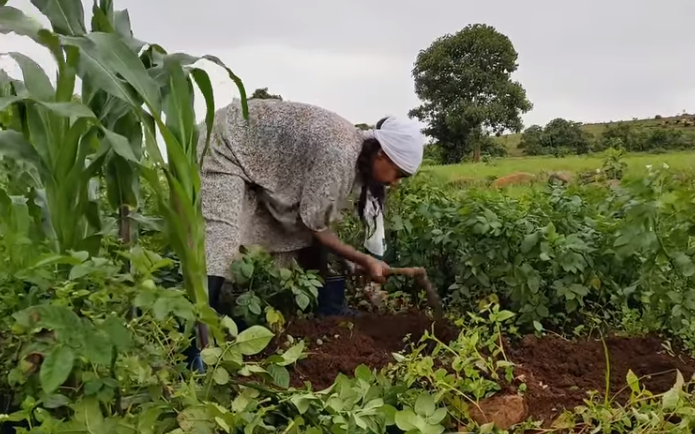 Mebrat Bekele, 80, recounts with nostalgia how her former kebele (village), now an abandoned pile of stones and rubble, was neatly nestled between a small seasonal river and the lush, hilly grasslands. Mebrat has lived all her life in the Halega micro watershed in the Southern Nations, Nationalities, and Peoples’ (SNNP) region. She describes how the highlands were enveloped in dense forests, creating a haven for mammals and birds.

From the comfort of her house, she could watch distant views unfold. The mountains and hills paraded across the horizon, their beauty gleaming in the sun, and one could not help but be in awe.

The Ethiopian highlands are the breadbasket of Ethiopia, given that most of the country’s food is sourced there. Ethiopia’s economy is heavily dependent on rural agriculture, with close to 80 per cent of employment and about 46 per cent of GDP concentrated in this sector. The majority of farmers residing in these highlands are peasants who produce mainly cereals for self-consumption, with a small minority also producing crops for subsistence and commercial use. With many of Ethiopia’s 115 million people relying on the highlands for food production, it’s no surprise that the country’s breadbasket is under tremendous pressure. Land degradation and deforestation have plagued the country for decades, resulting in the near destruction of the highlands in an already drought-prone region. Given that rural agriculture makes up most of the economy, restoring and protecting the highlands, including the forested areas, is crucial to building a climate-resilient and sustainable future. And that means including women in decision-making.

There is a long history of poverty and land degradation, especially in the Ethiopian highlands, which were previously endowed with wildlife, fertile soils, grasslands, forests, and springs. In those days, the population was low, and farming was done on a relatively small portion of the land. Communities co-existed with their environment.

As with other places in the highlands, misuse of natural resources in Halega accelerated towards the end of the 1970s, when the country’s military government, the Derg (1974–1991), nationalised rural lands and expanded government-run farms. Consequently, many people were unable to meet their food needs. Population increase also led to further sub-division of their government-allocated plots. This situation was further compounded by the drought and famine of 1984–1985. Struggling with low agricultural production and faced with imminent starvation, many residents resorted to converting forested communal lands into subsistence farming plots, albeit without proper land management practices. This has inevitably led to unprecedented soil erosion and land degradation. Mebrat observed the dire consequences of misuse of natural resources: increased vulnerability to droughts and floods, gully formation, food insecurity, disappearing forests, declining crop yields, and widespread poverty.

Yohannes Mekonen, a priest in Tigray, recalls: “We used to eat what we could find. Wild leaves, roots, just about anything to quell the hunger pains. When you are starving like we were, your primary concern is surviving the next hour and day. You do not consider the nutritional value because you do not have the luxury since your body has been triggered into survival mode and you have to find any type of food to sustain it before it collapses. As a result, there were many children and the elderly who suffered from malnutrition. The mortality rate was very high. ”

Today, residents have realised that climate change is compounded by environmental degradation caused by human misuse of natural resources. After the droughts of the 1980s, the subsequent famine and migration, and the fall of the Derg regime in 1991, a series of government efforts have been made to address climate change and land degradation. Most of these efforts have been imposed top-down through campaigns by production cadres, thus inhibiting genuine ownership and decision-making from the communities themselves. Additionally, they have focused on male smallholders, thus excluding the perspectives of female farmers. The resultant effect has been that conservation has not been fully integrated into people’s mindsets, and not enough attitudes have been transformed.

Dr Elias Shiferaw, an Associate Professor at Addis Ababa University, notes: “Some of the government’s efforts have helped in addressing land degradation in the short term. However, they have also created a dependency syndrome amongst residents. Community empowerment for men and women, young and old, will help us break this culture. To reverse the highlands’ environmental and economic slide, we need a sustained, inclusive, integrated approach that increases communities’ self-motivation and willingness to embrace community-based solutions.”

Young girl fetching water in a stream in Gondar. The stream reflects past unsustainable practices that have led to it nearly drying up. / Photo/Courtesy/ Yodit

The government’s shift in approach is reflected in its support and promotion of sustainable land management practices to reduce land degradation and improve land productivity. To address the extensive land degradation problem across the highlands, the government developed the Ethiopia Strategic Investment Framework for Sustainable Land Management (SLM) (also called the national SLM Program) with support from the TerrAfrica partnership, a World Bank-supported sub-regional initiative for SLM in Africa. The SLM Program (SLMP), which was to aid in inaugurating an integrative and comprehensive approach to resource management in Ethiopia by involving highland communities fully in decision-making, was implemented in two phases, Phase I (2009-2013) and Phase II (2014-2019). The SLMP sought to reduce land degradation by: (i) improving smallholder farmers’ agricultural productivity; and (ii) restoring and protecting ecosystems and diversity in agricultural landscapes.

A local cleric, Yohannes Mekonen says: “The SLMP has provided us benefits through fully integrated landscape conservation, rebuilt lost trust among members of the community, and improved our communal working spirit. We have endured hardships in the past and it is now time to work and grow socially, culturally, and economically together. ”

The voices are becoming louder and bigger

Even as Ethiopia and the rest of the world struggle to adapt to climate change and protect and restore remaining ecosystems, addressing local issues is critical. In Ethiopia, that means promoting gender equality, considering women’s prominent role in development activities. For instance, educating girls and women and including them in decision-making and building new economic systems that factor in the numerous and valuable services provided by the highlands. According to UNEP, addressing the gender gaps in leadership, entrepreneurship and access to social protection may be a good international and national objective, but, again, in places like rural Africa and Asia, where traditional social structures are still pervasive, change needs to be driven by governments and others.

Nana Worku, a resident of South Gondar, says that the lack of women’s participation stems from a history where a few children, especially girls, went to school.

“My parents didn’t encourage me to go to school. They had little to no money and, like me, could not go to school. Our culture encourages girls to get married instead. These days, the government emphasises the importance of educating girls, not just boys. As women, we are the custodians of society,” she said.

Nana further explains, “For the first time in the history of our area, the SLMP created a forum participation by the chronically marginalised women who are seldom included in decision-making. The programme gave us tools and a space where generations of women could share indigenous knowledge, be it for conservation or livelihood improvement. It brought us Yodit Worku [a youth environmental activist] whom we are also mentoring. ”

This is in line with what Mia Mottley, the Prime Minister of Barbados stated during COP 26 in Glasgow when she called for exploration of nature-based solutions and incorporating food and water into the global policy agenda, where sustainable food systems and effective water management are central to conversations about halting and reversing biodiversity loss, keeping global warming within 1.5°C, and feeding the world healthy and sustainable diets.

A sustainable development expert, José C. Carbajo, says that more women, particularly rural women, should be involved in decision-making about the restoration of landscapes and ecosystems, as this will reduce the differential impacts that watershed management programs have had on them. He also asked stakeholders to use the SLMP as a stepping stone to develop and promote more gender-inclusive ecosystem management programs that encourage the involvement of youth, women, and the landless.