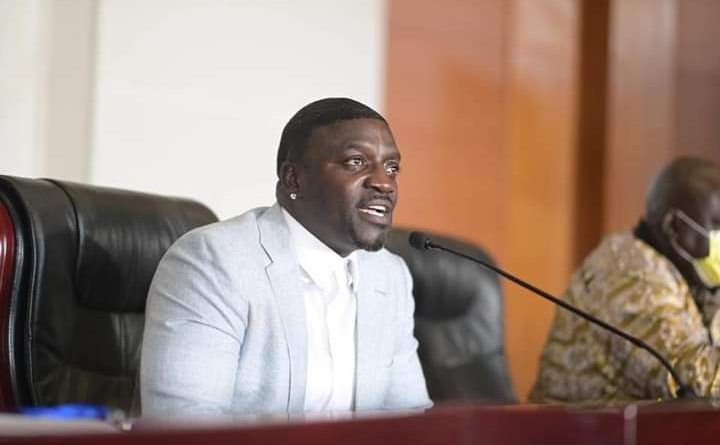 And many are questioning why government could afford him free land for the ‘planned’ city ‘that will never take place.’
Senior journalist Andrew Irumba wondered: “So if filthy rich Akon wants to invest in Uganda, why not accord him the opportunity to start off by buying for himself approximately 650 hectares (1 square mile) of land for his investments??!!

Why give him poor people’s land FREE that they will one time turn around and reclaim without giving a damn how much billions of dollars he will have invested on a land that doesn’t belong to him?! Does he also need A START UP CAPITAL from us the poor?”

“But Ugandan leaders oba (sic) they’re like how! Do you know how many Ugandans in Nakasongola would be rich by the time Akon finishes buying their 1square mile of land and shifting them??
That way, the poor people would understand Akon to be relevant in their lives,” Irumba wondered.

Irumba joins other prominent and non prominent people to question Akon’s capabilities and practability in building the futuristic city.
Other Ugandans including Hon. Mathias Mpuunga have blatantly dismissed Akon’s plans.
He described it as witchcraft.
“AKON City!! Witchcraft is real; am sure even the hosts were shocked at the possibility!!!” Mpuuga stated on Twitter.

Akon’s cryptocurrency construction plans have already been questioned in his native Senegal.
The artist-turned-mogul told media yesterday that he plans to build a futuristic city in the country.

The Ugandan government announced on Monday that it had allotted Akon one square mile of land for him to begin planning an Akon City in the country.

Like the city he is set to build in his native country of Senegal, the Ugandan Akon City will operate on his AKoin stellar-based cryptocurrency.

Akon did not reveal how much this project would cost. However, its sister city in Senegal is expected to cost $6 billion to construct.

Along with the cost of construction, the amenities included in Akon City, Uganda have not been announced. Yet, it will likely follow the blueprint laid in Senegal which includes a Hamptons Hospital campus, Hamptons Mall, its own school, police department, and waste management service as well as parks, stadiums, and other recreational facilities.

When asked if the average Ugandan would be able to afford these amenities, Akon urged the public to believe and invest in themselves because the development of cryptocurrency will bring the country much-needed opportunities.

Construction on Akon City in Uganda will be completed by 2036.
If it ever happens, anyway.

According to a story published by Nellie Pyton for Reuters, the Akon City proposal has been met with suspicion and bemusement by Senegalese.
Questions about land rights, financing and feasibility remain unanswered, and locals are wondering whether the promised benefits will ever come.

“Akon came to meet us. He said he’ll do this. It could be real or not real,” said Magueye Ndao, mayor of Ngueniene, the municipality containing Mbodiene and other villages where Akon City will supposedly be built.

If history is any guide, they will most likely be let down, said Xavier Ricou, an architect and former director at APIX, Senegal’s agency for promoting investment and major projects.

“During the 15 years or so that I worked at APIX, I saw proposals from people who wanted to make cities all over,” said Ricou, revealing how millions of dollars were spent on advanced plans for cities that were then never built.

They were mostly abandoned, he said, due to inadequate funding, a change of government or some other, unknown reason.

As for Akon City: “I think nothing will happen.”

In November, work began on a youth centre in Mbodiene – another Akon project.

At the project site, a single stone sits on a pedestal in an empty field, untouched since Akon and the tourism minister held a stone-laying ceremony to kick off the project in August.

Of the $6-billion-dollar budget, it’s not clear what has already been secured. Akon’s team did not respond to multiple interview requests about this matter.