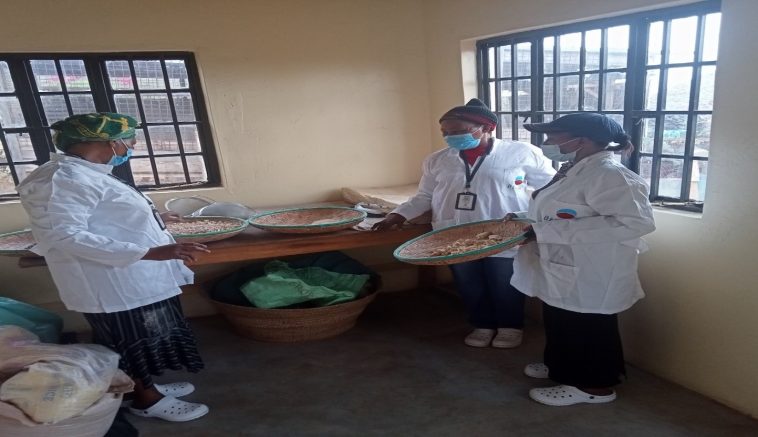 The baobab tree stands out from other trees by its two characteristics, its gigantic size and age.

Known by its scientific name Adansonia digitata, the most common species of African Baobab is found in 31 African countries, including Kenya.

The African Baobab is a species of the African sub-Saharan region. To some it’s known as the “tree of life” it holds a special status and role in the traditions and livelihoods of communities across Africa, according to data from Royal Society Open Science published in 2019.  https://doi.org/10.1098/rsos.190854

As climate change continues to bite, with fewer rains, temperature rise and water scarcity leading to low food production and uncertainty, agriculture the backbone of the economy is largely affected by climate change, women in Mbulia Taita Taveta County in coastal Kenya, are thriving from baobab business, despite numerous challenges.

It’s a sunny afternoon, the blue sky spread smoothly above us under the scorching sun, here I meet some of the women who engage in baobab business for upkeep.

Marline Mwashimba hails from Mzwanenyi village, Ngolia Location, about 36.5 km from Voi town, Taita Taveta County in Kenya. Marline used to burn charcoal and other activities that destroyed the environment.

“Before I used to burn charcoal and cut down of trees, with forest officers chasing us, at times collecting the only charcoal put my hope on to sell and get cash to feed my family, I lost a lot of time and energy, but since I got engaged in this Baobab project, my life has changed big time,” she says.

Mwashimba a mother of three says this baobab business has improved her life, her children are schooling well and her family is healthy.

Close to her is Josephine Mwasambo, another mother of three, she too like Marline used to engage in charcoal business, engaging in cat and rat chase with forest officers, a scenario she terms as an embarrassment.

“I would do any kind of job that came my way, from washing clothes to tilling farms, then I decided to join other women on charcoal burning, but this one drained my self-esteem and brought shame on me, because I will engage forest officers on up and down the chase, but since I embraced baobab business my esteem has scaled up,” adds Josephine.

“I wear two hats, because my husband is a drunkard, and as a woman, I have to work hard for my family, despite the climate change and hard life outside here, menial jobs, charcoal burning and herding cattle was my piece of cake in order to sustain my family,” Maria opens up.

That’s Maria Mkawasi, a mother of six girls, who also works at the baobab firm, to sustain her family, since her husband is into alcoholism.

According to data provided by Beulah Gardens, they break about 235 baobab tusks in a day, which produce about 6kg of seeds. These six kilograms when scrubbed off, it produces again 4 kilograms of baobab powder. The scrubbed and washed seeds then are squeezed to drain off their oil. With baobab, nothing goes to waste.

Beulah is derived from the bible verse in the book of Isaiah chapter 62:4, “indeed Beulah is no longer desolate but breathes life full of trees and happy empowered women.”

According to Rachel, her delight is to empower women in society by creating more job opportunities, from using readily available materials, since women encounter myriad of challenges posed by climate change.

More than 20 women have been empowered and impacted with the knowledge that has uplifted their social status and elevated their financial status.

Buying of Baobab is seasonal, but processing is continuous and spreads throughout the year. “We buy approximately 20 sacks of whole baobabs, after production, they expel oil between 4-7 per cent, valuable in the cosmetic industry” Adds Rachel.

She adds that 270 kilograms of baobab seeds give between 15-18 litres of oil and a by-product of seed cake.

Food Agriculture Organization (FAO), field project officer in charge of Taita Taveta County Kenya, who also works with FFS Groups in the area, Abedih Mbatha says these women inquisitively decided to try value addition on a baobab, to get extra cash for other personal developments.

“Besides growing vegetables and keeping chicken, they decided to give baobab a unique touch by adding value to it, and out of their persistence they managed to fetch baobab powder, sweetened seeds, baobab oil, tusks for firewood, while all residues got is fed to goats and chicken,” says Mbatha.

Consequently, Mbatha says it’s high time for county governments and other stakeholders to invest in value addition chains so that farmers don’t lose any efforts put in farming, rather employ methods that will go in well with the UN Sustainable Development Goals, on food sufficiency, affordability and sustainability.

This article is part of AWiM/UNEP Africa Environment Journalism Programme