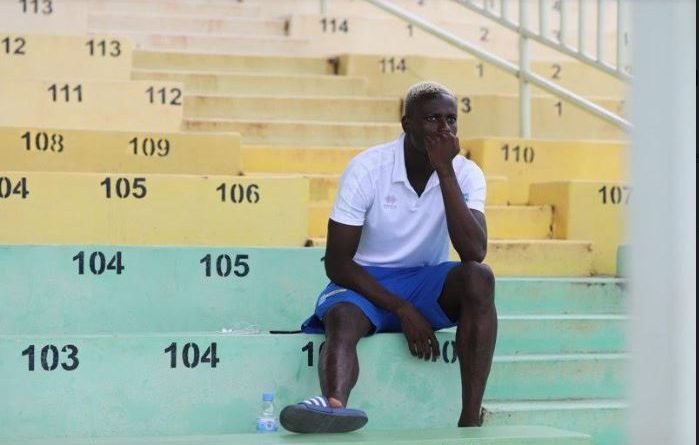 On Wednesday, April 23 2020 Rayon Sport football club announced it had terminated with immediate effect the contract for striker Michael Sarpong, allegedly for insulting the then club president Sadate Munyakazi.

“Considering that no reason can justify your insulting and dishonorable behavior, we are forced to terminate your contract,” read the part statement released to that effect.
It added: “The termination of working relationships on the field without notice or compensation is required and takes immediate effect.”

They players trouble stemmed form, the talk show on one of the local radio station he was hosted a few days earlier where he castigated  the club president Sadate Munyakazi as not fit to lead a football team of Rayon Sports Caliber.
Sarpong made the statement in reference to the decision the club had taken to suspend players salaries and contract due to the impact of Coronavirus which according to analysts It was done in this regard of the law.
For one Peace (second name withheld on request) a volleyball player at one of the big clubs in the country says their salaries were suspended at the beginning of the Corona virus without a clear explanation.

“We were told at a later stage in the months that followed that our salaries won’t be coming since games had been stooped as a way to contain the spread of Corona Virus and this shocked because it was in disregard our country’s labor laws,” She says.

However she notes that as players they could have reached understanding with club management   had they tried to explain to them since they understood the situation.

According to the country’s labor laws in case of suspension of employment contract due to economic or technical reasons, an employee cannot be laid off one or more times for a period longer than ninety (90) days during the same period of one (1) year.

The law adds that, upon expiry of the period provided for under Paragraph One of this Article, the employee is considered dismissed, and receives terminal benefits provided for by this Law.

The employer may, after informing employees’ representatives in the enterprise, proceed with individual or collective dismissal due to the enterprise’s internal reorganization or restructuring due to economic reason or technological transfer with the aim of preserving the enterprise’s competitiveness and informs in writing the competent labour inspector.

In case an employer proceeds with individual or collective dismissal on the grounds provided for under Paragraph 3 of this Article, he/she places employees on the list of those to be dismissed based on performance, professional qualification, experience in the enterprise and legally recognized dependents of each employee.

One of Sports club Kiyovu’s player was left dismayed about the suspension of their contracts without consulting them.

“We weren’t happy about it, because they suspended our contacts, moreover they haven’t paid us our money, which is equivalent to a month and half salary, thus they ought to have paid us first. Another issue regards the fact that they simply suspended our contacts without consulting us, because some us received the communication about the suspension through Whatssap” the midfielder says.

The leadership of sports teams that suspended their players contracts  point out financial problems, as a result of  not having means of income generation mechanisms, because fans no longer watch football in stadia, and games are no longer in existence, thus proving to be difficult to get partners, when games are no more.

Munyentwari Maurice, a legal expert advises institutions that had suspended contracts before, not to repeat, because its contrary to the laws.

“The law is well elaborated; a person can’t have his contract suspended more than once in a year, because of economic reasons, within a 90 days’ time frame, or basing on the technical issues.  It is in this context that employers have to implement what the law stipulates.”

As a result, he notes that employees that if any one happens to have his contract suspended for the second time, moreover when he had been suspended for 90 days, within that particular year, he is entitled to benefits that are meant for a person, whose contract has been suspended, thus deserving employment termination benefits.