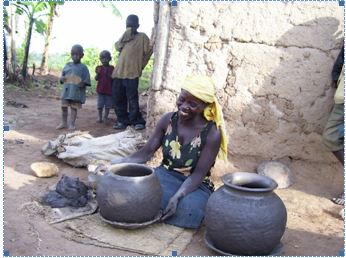 Rwanda’s traditionally marginalized people commonly known as the Batwa have received timely justice after they were arrested for returning to forests for survival after losing their jobs during Covid-19 pandemic, according to authorities.

The traditionally marginalized people have been among the hardest hit during Covid-19 period where their pottery work is considered a luxury for their clients and this is forcing them to return to forests and engage in cross border smuggling activities which sometimes leads to arrests.

Traditionally, the Batwa people didn’t own land, didn’t acquire any professional skills to help earn a decent living but were potters, hunters and fruit gatherers but efforts to resettle them in organized communities and equip them with skills were taking shape until Covid-19 disrupted these efforts.

The many who have been affected by Covid-19 preventive measures and likely to go back to forests and take part in cross border smuggling are in the northern province districts of Musanze and Burera.

“Many people in Musanze who have violated the laws and regulations irrespective of any differences in background have been arrested and justice dispensed equally and timely. We have not victimized anyone,” said Jeannine Uwumuremyi, the mayor of Musanze district.

Rwanda’s current take on social setting is that all of the citizenry are Rwandans, thus belonging to any of the tribes that comprise the Rwandan population has been abolished and all people are one and the law applies equally.

“I don’t know any specific case with regards to different people but all the people are treated the same in all aspects of life including before the law during this pandemic” added Uwumuremyi.

However, the financial capacity of the traditionally marginalized people more especially during the Covid-19 times is making it almost impossible to afford meaningful legal services thus delayed justice.

The pandemic has reduced the amount of casual labour available and job loss is a big problem to this group of people since they depend on what they earn on a daily basis for survival, engaging in casual labor for others.

Because the ones who happen to be having money no longer have enough money because of Covid-19, therefore they can’t afford legal services.

Moses Nezehose, an activist for the marginalized people in Musanze said that,  “the cases of these people getting arrested may occur during Covid-19 and their justice may be affected because they don’t have money to hire lawyers. And there are no institutions so far to offer this kind of legal support to these people hence a likelihood of no justice.”

Traditionally, the Batwa were hunters/gatherers, whose habitats were in forests. Since the 1960-2000s, most of them were evicted from forests and were relocated within general society, on grounds of protecting the environment.

However, prior to Covid-19, many of them worked as guides to the tourists, going to National Parks, but since tourism is heavily reduced due to the pandemic, this has further exacerbated their plight.

With little or no choice pertaining to how they can feed themselves and their families, they have opted to go back to their ancestral habitat, so as to look for food.

There are also reports that women have also gone back to the forests to look for firewood for selling, and the game rangers discovered their presence there, consequently they were beaten, and one woman who had a baby on her back fell down, thus hurting her baby who later on was pronounced dead.